In 2022, the Congressional Award Foundation partnered with the DC Office of Cable Television, Film, Music, & Entertainment and the Deanwood Youth Journalism Program to create season two of the podcast series Cafe Radio. This podcast is designed to educate youth about the program and offer valuable career insights from alumni and leaders. This student-led podcast covers the journeys of six individuals in their quest to earning the Congressional Award Medal and their stories of life after the award.

Originally for Los Angeles, Bonnie now lives in Seattle where she has held multiple positions within Microsoft. In her current role she works on the environmental sustainability team where she focuses on corporate environmental strategy. This career path stems from her love for biology and her desire to make an impact through conservation. Before taking on her role at Microsoft, she trained as a conservation biologist and was recognized as a National Geographic Explorer for her work in environmental education. Previously, she worked on various projects such as initiating the marine program for the Wildlife Conservation Society in Myanmar, discovered a new sea slug species in the Caribbean, and researched climate adaptation of endangered penguins in South Africa. Bonnie received her B.A. in organismic and evolutionary biology at Harvard University and was an inaugural Schwarzman Scholar at Tsinghua University.

Alexis began her Award journey when a mentor at Beaches Habitat told her about the program and encouraged her to sign up. Through this mentor, she was able to work with multiple students at all levels of The Award and grow as an individual as well as network with her peers. During her Award journey, she was able to work with the nonprofit Junior Achievement, where she worked on her personal development goals by focusing on financial literacy and business development. Because of this focus on business and financial literacy, she has been inspired to one day start her own business. After The Award she studied communications at the University of North Florida and began her career in public relations and nonprofits. She is now working as an executive assistant at a tech company which was inspired by her STEM Star Award work at The Award. To her, the mentorship aspect of The Award was what made it the most meaningful and she is grateful someone encouraged her potential.

During her time as a participant in The Congressional Award program with her older sister, Bailey lived in Kansas City before completing her BFA in Recorded Music at New York University. The Award motivated her to continue her work on program pillars such as physical fitness through tennis, personal development through music, and volunteerism through her local junior league into adulthood. Her love for music in addition to her passion for business led her to become the Music Licensing Specialist for The Tonight Show where she oversees all the music licensing for the show. Without The Award giving her the motivation to continue her love for music, she may not have decided to go into the music industry.

Currently in her senior year of high school, Medhnaa was inspired at the age of seven to begin raising funds for the Bal Ashram orphanage in India after a visit with her family. During her first fundraiser she raised over $4,000 for the orphanage and began hosting additional bake sales and reaching out to donors. She started her own foundation called Touch of Life which has helped pass bills, work towards advocacy outreach, and has raised over $300,000 for the orphanage. She has a passion for STEM and has volunteered hours towards helping students in India learn robotics, math, and coding. She sees her accomplishments as an extension of her ADHD diagnosis and believes that it is a large motivator in the work she has done. She hopes that more people can learn to use their differences, such as ADHD, to their advantage rather than viewing them as an insurmountable challenge.

Continuing Service Beyond the Award with Christopher Merken

Before obtaining his LLM in Trial Advocacy, Christopher attended the University of Delaware for political science and Villanova University for law school. His past experiences include interning for then Vice President Joe Biden, working as a judicial clerk, and being an adjunct professor of law at the Delaware Law School. His Award journey began in the eighth grade when he took on the self-motivated initiative to find a program that would highlight all the activities he was already participating in. His Award experience was key to helping him in his future career and he has discussed the experience before in interviews and on resumes. He is hoping to either become a lawyer in Philadelphia or work on the White House Counsel this upcoming Fall.

Discovering Your Own Path with Nikhil Kapoor

Nikhil is an amazing example of an individual who has taken the time to choose the right path for themselves. He began his career path in engineering like his father, but quickly switched his path to the medical field when he discovered his love of biology and anatomy. In his senior year of undergrad at Clarke University, he was accepted to four medical school programs but decided instead to take the LSAT so he could explore the Law of Science. He believes this will allow him to combine his passions for biology and the medical field with his passion for advocacy. He will be attending Northwestern University Law School in the Fall. As a side hobby, he is a fashion designer with his own Instagram and blog where he promotes fashion, diversity, and inclusivity. 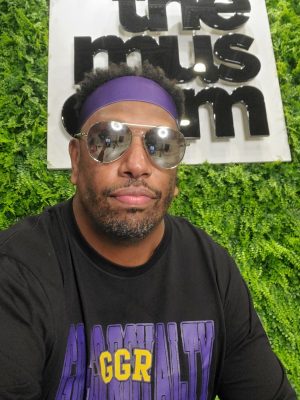 The program was created in 2016 to educate young adults about the importance of broadcast journalism, while learning to advocate for their communities through media.  The program serves 40 teens from Wards 7 & 8 in Washington, DC.  Since 2016, the program has sent 21 students to college to major in mass communications or broadcast journalism.  The program receives no funding and is run out of the Deanwood Recreation Center by the director, Bootsy Vegas.

The mentorship program is a part of the CAF Board’s initiative to reach more students of color and make an impact in the DC community.  Deanwood will serve as a pilot for a plan to serve additional communicates that include Detroit, Baltimore and Houston.

Bootsy Vegas, known in the DMV as Salih “E” Williams the pride of DC Public Schools. Bootsy Vegas is a graduate of McKinley Tech and AAMA Broadcasting School. By day Mr. Williams is a teacher educating young people within the Washington, DC school system where his motto is “Saving the Youth one young person at a time” but by night he is known as “E” aka “The 5th Letter” lead talker, go-go legend and party starter for OP Tribe, Obsession and LISSEN go-go band based in Washington DC.

In his travels, Bootsy Vegas has had the privilege to work for the musical legendary group Earth Wind and Fire as a marketing promotions rep where he was mentored by Maurice White, Verdine White, Phillip Bailey and Ralph Johnson. He was also heard on The Donnie Simpson Morning Show as he showed his ultimate DC sport team pride with his famous Redskins Song, this experience provide inspiration to achieve his goal of being on Radio.