The Congressional Award provides opportunities for young people to unleash their potential by achieving personal goals focused on volunteerism, character development, and fitness.

The United States Congress established The Congressional Award in 1979 to recognize initiative, service, and achievement in young people. It began as a bipartisan effort in both the United States Senate and the House of Representatives. The original bill was sponsored by Senator Malcolm Wallop of Wyoming and Congressman James Howard of New Jersey.

The Congressional Award is the United States Congress’ award for young Americans. It is non-partisan, voluntary, and non-competitive. 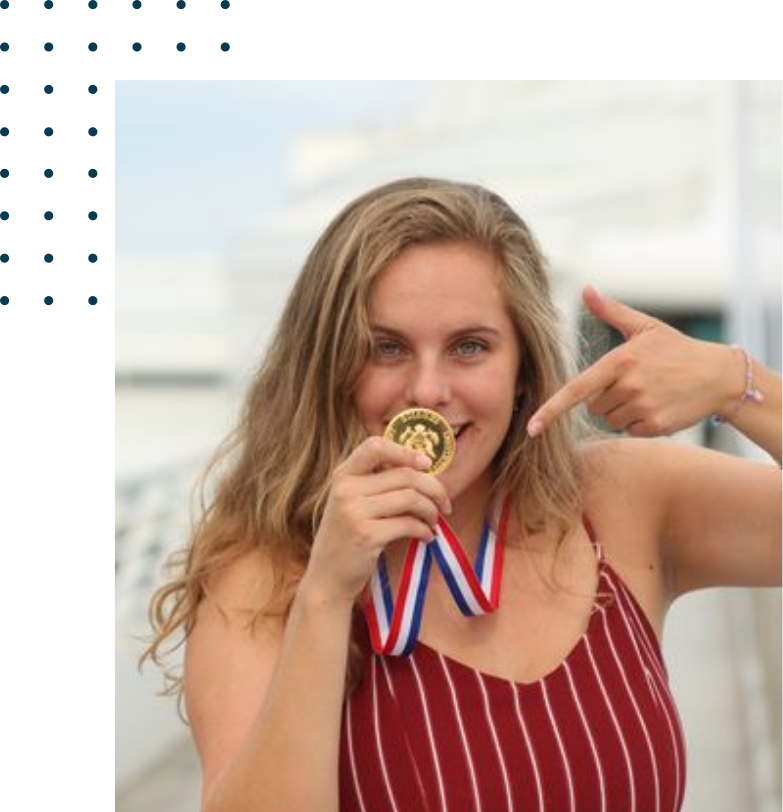 The program is open to all youth in the US between the ages of 14 and 24 regardless of ability, circumstance, or socioeconomic status.

Earning The Award is a fun and interesting way to get more involved in something you already enjoy or something you’d like to try for the first time.

You move at your own pace, on your own or with your friends. The Congressional Award has no minimum grade point average requirements. It accommodates young people with special needs or disabilities who are willing to take the challenge. This is not an award for past accomplishments. Instead, you are honored for setting goals, creating an action plan, and meeting the challenge. 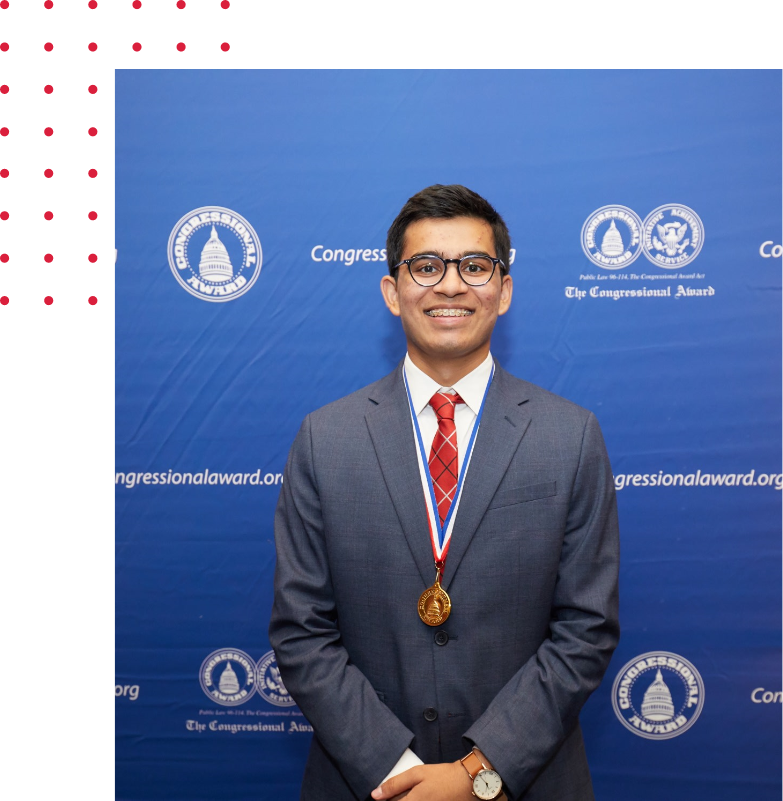 Register and submit your one-time $25.00 registration fee.
You only have to register for the program once, and the minimum age to register is 13 1/2 years old.

. Work with your Advisor to: 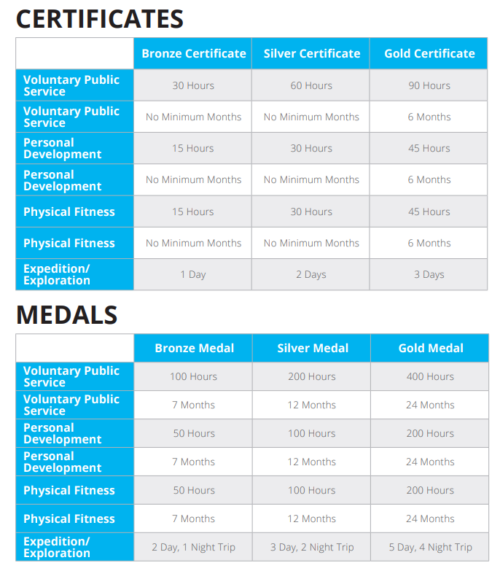 WORK TOWARD YOUR GOALS

Work at your own pace. There are no deadlines. Record your achievements in your Submittable account.

Select a Validator for each goal to:

When finished with the required hours for this level, complete all parts of your Record Book and ask your Advisor to sign. On Submittable, you can send your Advisor an an email notification to digitally approve your Submittable book. Your Advisor’s signature will certify that your goals were met in each of the four program areas.

Submitting via E-Mail or Mail: Please contact your Program Manager if you are not able to submit your record book digitally on Submittable and need an accommodation.

Once your submission is approved, your status will be updated on Submittable and you will receive a letter from the Congressional Award.

If we have any questions or need additional information during the review process, you will receive a revision email notification from your Program Manager.

Once the requested revisions are updated on Submittable, the Program Manager can approve your submission.

MOVE TO THE NEXT LEVEL

Work with your Advisor to either set new goals or plan additional activities for your current goals. Remember, you can carry the hours spent earning one award with you to the next level. You will repeat steps 2, 3, and 4 at each award level. Start working toward your next award immediately. Record your next level on Submittable.

The Wallop Howard Leadership Award is presented to individuals in the public sector who have displayed outstanding commitment to improving the lives of our nation’s young people and providing critical support in The Congressional Award Foundation’s efforts to make the program a national opportunity. The award is presented by The Congressional Award Joint Leadership Commission, comprised of the Speaker and Minority Leader of the House and Majority and Minority Leaders of the Senate.

The Horizon Award is a special recognition from the Joint Leadership Commission of The Congressional Award Foundation and its Board of Directors. The Horizon Award is presented to individuals from the private sector who have contributed to expanding opportunities for all Americans through their own personal contributions, and who have set exceptional examples for young people through their successes in life. These recipients have truly forged ahead, establishing noble horizons to which our youth can aspire.

A recipient of the NFL’s Walter Payton Man of the Year Award, Brees founded his own non-profit organization, The Brees Dream Foundation, to provide care, education, and opportunities for children facing adversity.

Johnson created The Rock Foundation to educate, empower, and enrich the lives of children worldwide through its youth physical fitness and obesity prevention program and its educational worldwide giving program.

2009 | NICK CANNON
At the time of recognition, Nick was named Honorary Chairman and development consultant for TeenNick. In this role, he provided his insight and knowledge as Nickelodeon sought new means for reaching teen and tween audiences. He also hosted Nickelodeon’s HALO Awards, an hour-long special celebrating ordinary teens who make a difference in the world.

This academy served as a sanctuary for kids interested not only in how the game is played but how the game can impact their lives.

2010 | MICHAEL OHER
Senator Roger Wicker awarded the NFL player for his ultimate “beating the odds” story. Michael’s high school life was the subject of Michael Lewis’ book The Blind Side: Evolution of a Game and the Academy Award winning film The Blind Side.

Oher’s story is one of inspiration, overcoming even the most insurmountable obstacles, like homelessness, to achieve a dream.

Her emphasis on goal-setting, as co-chair of the President’s Council on Fitness, Sports and Nutrition, echoes what our outstanding youth also strive to accomplish.

A well-known humanitarian, he founded the Dikembe Mutombo Foundation, dedicated to improving the health, education, and quality of life for people in his native Congo.

Before being elected to Congress in 2015, Mrs. Dingell was known for many years of dedication to countless community initiatives, such as the development of the Children’s Inn, the Barbara Karmanos Cancer Center, and the March of Dimes.

Ewing support of various philanthropic endeavors include Art for Life Charity and Children of Jamaica Outreach.

Mr. Horton worked with all five military branches worldwide on his “Ripped and Ready” tours. He has also worked on Capitol Hill and with the White House, with the First Lady’s “Let’s Move” campaign to increase fitness awareness and abolish obesity in America.

Former President of Def Jam Recordings, Mr. Liles has become not only an entertainment mogul but a philanthropic hero. His most impressive services are his local foundation, Kevin Liles for a Better Baltimore, and his Make It Happen Foundation.

One of America’s most inspiring executives, Steve brings a deep personal understanding of human differences to his position. He is considered an expert on matters of diversity and inclusion and its importance to the sustainability of organizations and the communities they serve.

2016 | AMERICA FERRERA
One of Time Magazine’s 100 most influential people, the accomplished actress has devoted much of her talent to social issues.

Ferrera has focused on important issues for the Latino and millennial communities, including voter mobilization through organizations like Voto Latino.

Ripken is using the platform that baseball has provided him to help grow the game he loves at the grassroots level. The Ripken Experience complex hosts ballplayers and teams from across the country for camps and tournaments throughout the year.

2017 | CHRIS DOLEMAN
Revered as one of the finest defensive players in NFL history, Chris played 15 seasons and earned eight Pro Bowl selections, membership in the NFL’s 1990 All-Decade Team, and induction into the Pro Football Hall of Fame in 2012.

Chris was honored for his charitable contributions to the Celebrity Charitable Network, Boys & Girls Clubs, and Warriors for Freedom.

2019 | GAIL MILLER
Gail Miller is the owner of the Larry H. Miller Group of Companies and the Utah Jazz NBA franchise. Gail has shown the importance of resolve and drive and has been a source of inspiration for many seeking to find their identity.

Learn more about Gail’s strong legacy of giving back to the communities in which she does business.