Diana Léon Brown currently serves as the Director of Strategic Partnerships for the County Executive Office of Prince George’s County. In this role, she leads and manages all the cross-sector partnerships on behalf of the County Executive, Angela Alsobrooks. These partnerships include relationships with national and regional nonprofits, philanthropic and private organizations. The objective is to leverage resources to strategically strengthen the economic and nonprofit growth of the county. Ms. Brown also oversees 10 million dollars of grants for the county’s nonprofits and small and works with numerous foundations and philanthropists to direct funds to qualified organizations that have passed the due diligence requirements of her department.

To strengthen the nonprofit sector, Diana has created and conducted numerous certified-training programs and workshops (in partnership with 10 universities) for nonprofit executives to strengthen their ability to meet a national standard of financial competency and business acumen. Ms. Brown believes that at the core of a thriving economy resides a strong nonprofit sector. She is committed to cultivating the next generation youth leaders and over the last 20 years, has served on numerous educational nonprofit boards and chaired several executive and governance committees (former boards include National Park Trust, The Black Student Fund, For Love of Children, National Cathedral Beauvoir School, National Presbyterian School, SITAR Arts Program, Leadership Greater Washington and the Latino Student Fund.)

Prior to her current position, Diana served in various cross-sector leadership roles. She led the Community Partnerships Department for Broward County’s Office of Commissioners in Florida where she managed the request for proposals (RFP) process for millions of dollars of government grants. She also served as the Executive Director for the Artem Leadership Institute where she developed high-level international programs and events with the United Nations, Organization of American States, and the Women’s Global Initiative. These programs helped to strengthen and provide access to minorities and rising youth leaders in various national and global sectors.

Ms. Brown also had the honor of serving as the appointed political liaison for the Obama Administration’s Office of Public Engagement. This position was created in response to the Haitian Earthquake of 2010. In this role she led the strategy, development and coordination for the White House, State Department, Organization of American States, and private foundations.
Diana graduated magna cum laude from Harvard University with a dual major in social science and economics. Additionally, she earned her MBA from the George Washington School of Business with a concentration in International Business. She resides in Maryland with her husband and their three wonderful children. 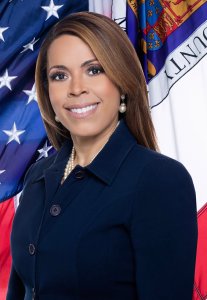