Rita Vaswani is the Senior Vice President and Senior Relationship Manager at Nevada State Bank and has more than 2 decades of banking experience. She is a Certified Medical Banker with a strong background in health care and focuses on banking relationships primarily serving the State’s Health care business industry.

Recently, Rita volunteered to do free COVID 19 testing to elderly at their homes & senior group homes & centers. She reached out to the elderly & uninsured Indian community in Las Vegas.

Rita was recently appointed to Nevada Governor Steve Sisolak’s transition Advisory Committee. She is the President/Founder of Las Vegas India Chamber of Commerce and a Co- Chair of the Governor’s Economic Development for Nevada-India Business Task Force. Governor Steve Sisolak was scheduled to visit India with Nevada Delegation in November 2020.

A Las Vegas resident since 1992 & California since 1971.  Rita was born and raised in the Philippines, with Indian heritage.   She is married with two children & 4 grandchildren. 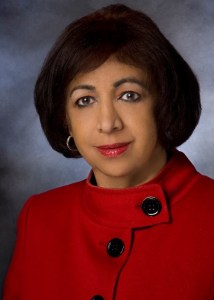